Bradley+Basso is a West London glass studio established by Ray Bradley in 1964 and developed into the partnership with Denise mt Basso in 2004 with its current wider spectrum of creative activities. It is a development studio, where the concept acquires credence before being translated into the relevant glass technique. Their work is mutually supportive, whether developed independently or as a duo and emphasizes the intimate interaction of light, form and space, to orchestrate the boundaries between the interior and exterior, between glass art and design, tradition and innovation, light sculpture and architecture.

The Partnership combines a long international experience supporting the vital dynamic of a new design and creative capability.

There have been projects with the Crafts Council and such diverse architectural partners as Maxwell Fry, Donald Insall Ass., SDA, Julian Harrap, Sheppard Robson, The Arts Team RHWL, The Harris Partnership, Ferguson Mann, and many more, with some joint projects achieving Civic Trust Awards and RIBA recognition.

Developed his initial interest in stained glass during his second year at Wimbledon School of Art, London. He then spent two years specializing in the medium for the National Diploma in Design and also gained admission to the stained glass department at the Royal College of Art.

During his three years at the RCA his interest developed towards a broader use of glass as an art form, in context with its variable applications to the current developments in architecture and the built environment.

Awarded ARCA, he then established his own studio in West London and over the succeeding years has considerably extended his knowledge and approach to glass, working with it in different ways and in many situations. He has designed and produced commissioned works using glass and other materials, in two and three-dimensional form, for public, private, religious and secular architectural spaces in England, Europe, Africa, the Middle and Far East and Australasia.

As a visiting lecturer, part time tutor and external assessor he has contributed to study areas in architectural glass, environmental design, fine art and product design. Most recently, during the years 1993-2003, he was visiting glass tutor for Design and Public Art at Chelsea College of Art and Design, London.

He has also received a Traveling Scholarship from the Glaziers Company, a Craft Council Bursary and a Churchill Fellowship for glass and ceramics in architecture.

Fulfilled her ambition to follow a creative career after business training and responsible positions in the textile and mosaic industries in Northern Italy. Her transition was accomplished by periods of study at the Scuola Internazionale di Grafica, Venice (under the Venetian artist Silvestro Lodi and German artist Andreas Kramer).

Subsequently she spent a year in London on an Arts Foundation course, where she developed her initial interest in the architectural developments in glass and gained admission to the BA Hons. Degree course, Design and Public Art, at Chelsea College of Art & Design, London, where glass was one of the specialist facilities.

During her time at Chelsea she continued to pursue her work through glass, which brought significant achievements in national competitions. She successfully completed two extremely ambitious projects during her final year and graduated with 1st Class Hons Degree.

After returning to Italy and re-establishing her connections with Venetian mosaic production, as a potential extension to her glass repertoire, she accepted an offer to form the creative partnership Bradley+Basso in 2004, working from both Italy and England.

In 2006 she gained an AHRC award and achieved her MA in Fine Art (with Architecture) in 2008, whilst continuing in private practice. 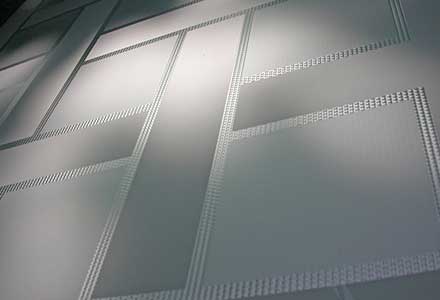